Located approximately in the geographical center of Bulgaria, the monuments located on the peaks of Stara Planina with the same names are an important part of Bulgarian history.

After spending the night in a campsite on the shores of Zhrebchevo dam, I decided to driveto Shipka and Buzludzha. Although I have visited them many times, I always like to return to these places.

Buzlodzha can be reached by an asphalt road from the southern side of Stara Planina. The turnoff is on the road to Shipka, just after Kran.

The monument of Buzludzha (official name Monument House of the Bulgarian Communist Party) is the popular name of the largest ideological monument of the communist regime in Bulgaria.

It was built in 1981 on Hadji Dimitar Peak, better known by its old name Buzludzha Peak (until 1942), in honor of the Buzludzha Congress, held at the same place in 1891. The Bulgarian Social Democratic Party was established at the congress. The Bulgarian Communist Party is considered the successor.

Asphalt roads from Shipka peak and from the main road Stara Zagora – Ruse in the section after Kazanlak have been laid to the monument. A tall, full-length monument to Dimitar Blagoev was build near the turnoff for the monument. (Dimitar Blagoev Nikolov, called by his followers the Grandfather, was a Bulgarian politician and philosopher, founder of the organized socialist movement in Bulgaria and of the first social democratic party on the Balkan Peninsula – the Bulgarian Social Democratic Party.)

The then Construction Troops took part in the construction. The monument was unveiled on August 23, 1981, personally by party and state leader Todor Zhivkov.

The architectural appearance of the monument consists of clean shapes and smooth surfaces, and the selected materials are concrete, steel and glass. The three-dimensional solution consists of three main elements.

The main volume is a dome structure, resembling a plate according to many. The building is designed to withstand harsh weather conditions. The shape of the volume is streamlined and allows the passage of air flows along it, without creating a structural hazard. At the same time, a 68.5-meter pylon rises at one end of the “plate”, and its 16-meter foundations provide additional strength to the supporting structure. At the top of the pylon is a panoramic site, which reveals an incredible view of the Balkans.

Just below it are placed 2 huge pentacles – a symbol of socialist power. In the pentagon at the top of the pylon are mounted lighting fixtures with a power of 150 kW, and according to the project the light from them can be seen from the Romanian bank of the Danube, and at night and in clear weather – from the White Sea coast in White Sea Thrace. (Today’s Northern Greece).

The ceremonial hall in the building has a diameter of 42 m and a height of 14.5 m and is decorated with mosaics with a total area of 900 m2. They were in 42 colors and were arranged by a team of 60 masters for 18 months. It is considered that this is one of the best performances of mosaic art in our country. The mosaics recreate the struggles of the Bulgarian Communist Party and the building of a socialist society. The hall is surrounded by a corridor with 14 compositions reflecting peaceful labor.

After the political changes in Bulgaria on November 10, 1989, the condition of the monument deteriorated dramatically. In 1992 the monument was nationalized under the Law on the Nationalization of the Property of the Bulgarian Communist Party and was sealed. Despite its closure, criminals often enter the house and damage it. The building began to collapse, glass was broken, mosaics, ornaments and other elements of the monument’s structure were torn down. The mosaic portraits of Todor Zhivkov and his daughter Lyudmila Zhivkova were destroyed. The huge pentacle was fired at with a firearm in order to rob the rubies from which it is believed to have been built.

In 2020, a project was launched to preserve the mosaics in the monument and its future restoration.

Only 10 km to the west is the monument on Shipka Peak.

The Monument of Freedom (Shipka Monument) is a monumental sculpture on Mount St. Nicholas. The monument was buid in order to commemorate the feat of those who fell for the freedom of Bulgaria on the site defended during the Battle of Shipka, around which the decisive battles for the Russo-Turkish War and the Liberation of Bulgaria took place in the summer of 1877.

The foundation stone of the monument was laid on August 24, 1922, and its construction was completed in 1930. On August 26, 1934, the monument on Mount St. Nicholas was inaugurated by the head of state Tsar Boris III.

The Shipka epopee includes the battles that took place at the highest points of the Shipka Pass, where the peaks of St. Nichola, Eagle’s Nest, Shipka, etc .: the conquest of the pass by Russian units First Battle of Shipka, the decisive battles August 9-11, 1877. Second Battle of Shipka and the Standing of Shipka.

Shipka Detachment: The Bulgarian Militia, the XXXVI Orel Infantry Regiment and the XXXV Bryansk Infantry Regiment repulsed a 27,000-strong regular Ottoman army, not including the Bashibozuk hordes. The Shipka detachment under the command of Major General Nikolai Stoletov consisted of 7,500 soldiers and 27 cannons against the Central Ottoman Army under the command of Suleiman Pasha. The battles for Shipka began on August 9, 1877.

For six days, Bulgarians and Russians repulsed the constant attacks of the Ottoman camps with fire and bayonets. The most difficult and decisive for the defense is the third day – August 11, when the ottomans tighten the noose around the defenders and the ammunition is running out. It even led to the throwing of stones and trees against the Ottoman army. According to some sources, even the dead bodies were used.

At this most critical moment, when it seemed that Shipka would fall, the first reinforcement sent by Gen. Radetzki arrived from Gabrovo. In the evening all the companies of the 16th Rifle Battalion arrived and after a fierce battle the Ottomans retreated. Shipka is saved!

The most popular picture related to the battles is the work of the Russian artist Alexei Nikolaevich Popov. An exact copy can be seen in the exhibition of the Monument of Freedom.

The Shipka Pass connects the town of Shipka from the south and Gabrovo from the northern side of the Balkan Mountains. The total length is 29 km, and the highest point is 1195 m – Mount St. Nichola.

Nearby is the highest pass in Stara Planina – Troyan (Beklemeto). It connects Troyan and Karnare, it is 41 km long and its highest point is 1525m. Due to the high altitude and heavy snowfall and snowstorms in the area during the winter season, the pass is not maintained and is closed to traffic.

Near the Troyan Pass is the monument Arch of Freedom on Mount Goraltepe (1595 m). It can be reached by a narrow, asphalt road, on the south side of the ridge.

The monument is dedicated to the Russian liberators and Soviet troops. It is a massive concrete structure with a height of 35 meters. Bulgarian haidutis, as well as Russian and Soviet soldiers are depicted in bas-reliefs on the arch. They were greeted symbolically with bread and salt by women in Bulgarian folk costumes, respectively in 1878 and 1944, which are clearly visible on the north side of the arch.

The information is collected from various sources on the Internet. 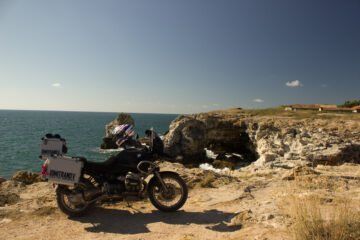 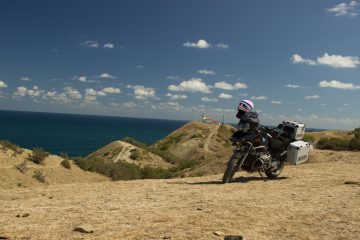 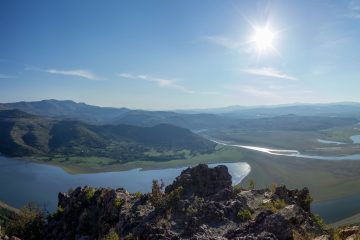