Romania is a Southeast European country known for the Transylvania region, surrounded by the Carpathians. Its preserved medieval cities include Sighisoara and castles, in particular Bran Castle, long associated with the Dracula legend attracting tourists from all over the world.

In motorcycle societies it is also known for its high mountain passes Transalpina and Transfagarash.

Early in the morning we went to Oryahovo. The goal of the day was to cross the Danube by ferry, around noon to rest in Craiova and to settle down in Sebes at some time in the afternoon. We arrived about an hour before the ferry sail (prices and timetable). The river crossing itself takes about 20 minutes. Upon getting down, the border police checked us relatively quickly and continued to Craiova.

Most Romanian cities do not have a ring road and all traffic moves through the cities. As we entered the city around noon, the heat of the day in combination with the traffic jam did not do well for my father’s Varadero. After the cooling fan came on, strange noises began to be heard from there. At the first moment we did not find a problem and decided that the fan itself decided it was time to “surrender”, but not long after, a yellow-green liquid appeared. Antifreeze! We quickly found a shadow between several buildings to look at the issue in more details. After dismantling, we found the cause. In preparation for the trip, as we dismantled the dashboard to place the GPS power cable, we dropped one of the screws that disappeared into the garage without a trace. Now we found it stuck in the radiator. It had fallen between the blades of the fan and the radiator and when in the heat, the fan started, the screw rammed into the radiator. Within few hours we glued the puncture with “poxipol” and proceeded to Sebesh.

We arrived late and found it relatively difficult to find a hotel, although it was a weekday. It was August after all…

Transalpine, or DN67C, located in the Parang Mountains group in the Southern Carpathians of Romania, is one of the highest roads in the Carpathians. It connects Novaci, south of Parang Mountain, with Sebes in the north.

The road was built from King Carol II on an ancient Roman road and consolidated during the Second World War by German troops. There is also a story that Nicolae Ceausescu built the Transfagarana Road (DN7C) during the communist regime, just to surpass Transalpine.

The road has its highest point at the Urdel Pass, 2,145 m high. Due to the high altitude, the road is closed during the cold months of the year.

The whole day is reserved for the pass. Since both passes are open only a few months a year, during the day, whether it is at working day, there are traffic jams. With that in mind, we left early and by 9am we reached the highest point. Photos and coffee stops followed. We arrived in Curtea de Arges in the early afternoon. This is the entrance to Transfagaras.

The highest point of the road is 2034 meters and this makes it the highest road in Romania. It was built by order of Nicolae Ceausescu from 1970 to 1974 for military purposes. The construction was mainly built by Romanian soldiers and with army resources. The reason for launching this large-scale project was Operation Danube – the invasion of the Warsaw Pact troops in Czechoslovakia in 1968, after which Ceausescu feared that the same could happen to him.

Today, the road is considered one of the most beautiful in the world.

We left early аgain, to avoid the traffic. Definitely this pass is more beautiful than Transalpina. At the top we even managed to take a picture with a bear. By 10 we were already getting off in the direction of Sibiu and the traffic in the opposite direction was quite heavy.

The temperature difference is quite large. It was about 13 degrees at the top of the pass and 43 degrees in the sun in Sibiu.

After a short tour of the city, we decide to continue to Sighisoara.

This is the birthplace of Prince Vlad Dracula.

The city center has a well preserved citadel. The city is on the list of UNESCO World Heritage Sites.

Along the way we are impressed by how tidy the villages we pass through are.

In the evening we stay in Brasov.

It’s raining in the morning. We put on our rain clothes and head to Peles Castle. The complex is located northwest of Sinai, 48 km from Brasov

The road is narrow and there are traffic jams in both directions. After checking the internet, it turns out that it is almost always the case, so one must arm themselves with patience.

The Romanian King Carol I (1839 – 1914) bought about 5.3 square km in 1872 hunting grounds for building of a summer residence. The first 3 architectural designs of the castle replicate other Western European castles and the King dismisses them as too expensive and lack of originality. Then German architect Johan Schultz presented a project that appealed to the King: a small Alpine-style castle combining Italian traditions with the аesthetics of the German neo-renaissance.

Construction works were interrupted in 1877-8, and on October 7, 1883, it featured a ball on the occasion of Carol I’s coronation.

This is probably one of the most beautiful castles and accordingly there are a large number of tourists who want to visit it. There are 2 ticket offices that sell tickets and queues go fast. But then it takes a long wait to enter the castle itself. Entry is in groups of about 30 people (there is a possibility of a guide in several languages). Large items and bags need to be left in the beginning and taken back out. In our case they made us leave our helmets, some people left their backpacks. Inside it is narrow for such a group. The guide takes us from room to room and tells us, but despite the beauty, we cannot fully enjoy. Once a room is entered, the front and back doors are closed and in the presence of such a group, movement is almost impossible. At the same time, a bunch of curators watch as if someone was taking a picture without paying to take pictures in the castle. The tour inside takes about an hour.

The following is Bran Castle, known for its legend of Dracula.

Bran Castle, in the village of Bran, near Brasov, is a popular tourist attraction in Romania. The castle rises on a hill above the Ruker – Bran pass, connecting the Romanian provinces of Transylvania and Vlahia. It is also known as Dracula’s Castle – a vampire from Bram Stoker’s Dracula’s book, however, according to which the castle is located somewhere in the mountains between Transylvania and Moldova. During his military campaigns, Vlad III Dracula repeatedly passed through the passa connecting his capital Targovishte to Brasov, but there was no evidence that he had seized the fortress.

Today, Bran Castle is a museum open to visitors to view art and furniture collected by the Romanian Queen Maria.

We are passing a large crowd of people. Turns out it’s the ticket queue (400+ people). We quickly find out how to buy tickets online and enter the gardens without waiting. I still do not understand why everyone was waiting.. Shortly after, it turns out that we need to be on the next queue, which is to enter the castle itself. It is much shorter and goes much faster. In 20 minutes we are already in the castle. There is almost no free space inside, almost nothing to see, and there is again a traffic jam.

Continue to Kampulung with the idea of visiting a salt mine in Slanik the other day. Mistake! There are 2 cities named Slanik in 2 different districts. Of course we are in the wrong place. We are only mistaken for about 150 kilometers.

Early in the morning we headed for the right Slanik. Again, there is a large queue. This time the reason is that the mines are reached by buses from the place where the tickets are bought. The original elevator, made entirely of wood to prevent corrosion by salt, has not been in operation since 2014. This way, the only way to enter is through a long tunnel, descending spiraling 208 meters underground.

Slanik Mine is an old salt mine located in Slanik, Prahova County, Romania, just 100 km north of Bucharest. The salt mine is closed for extraction but is open to visitors. Includes a microclimate with natural air conditioning and constant temperature and atmospheric pressure throughout the year. It consists of two levels called Unirea and Mihai. Many visitors come because of the healing effects due to the purity of the air.

The mine has 14 halls with a height of about 54 meters. The equipment used to extract the salt can be seen. There are also various playgrounds and attractions for children.

After a two-hour walk, we head to Turnu Magurele and the ferry to Nikopol. We arrived late and it turned out that we had missed the last ship. As much as we want to sleep on Bulgarian ground, we have to postpone crossing the Danube for the next day. We found a hotel (with furniture from Ceausescu’s time) where we could pay with a card because we had spent most of our cash, with the idea that we would leave the country. Of course, the restaurants did not accept card payment anywhere, but with the few remaining coins we got a banitsa (some sort of traditional for the Balkans breakfast) and a beer from a super.

We were about to head for the ferry when we saw the storm clouds coming. Naturally, the rain with thunder started soon. Few minutes later it almost stopped and we headed again to the ferry terminal. The border policeman allowed us to wait our turn and then the time to board the ship under the canopy at the border post. During this time, the rain stopped altogether.

After we reached home, we found that the border check was slower than on the Romanian side. Finally, a man, without any signage, appeared, collecting a “terminal charge”. The price was € 1 per bike, without explaining what he was raising money for. After asking in Bulgarian “Why?” he decided that 1 euro was enough for both bikes. Without further explanations we continued to Sofia.

So a few hours later we were home and making plans for our next trip. 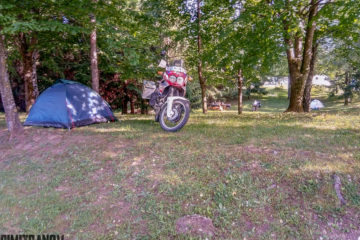 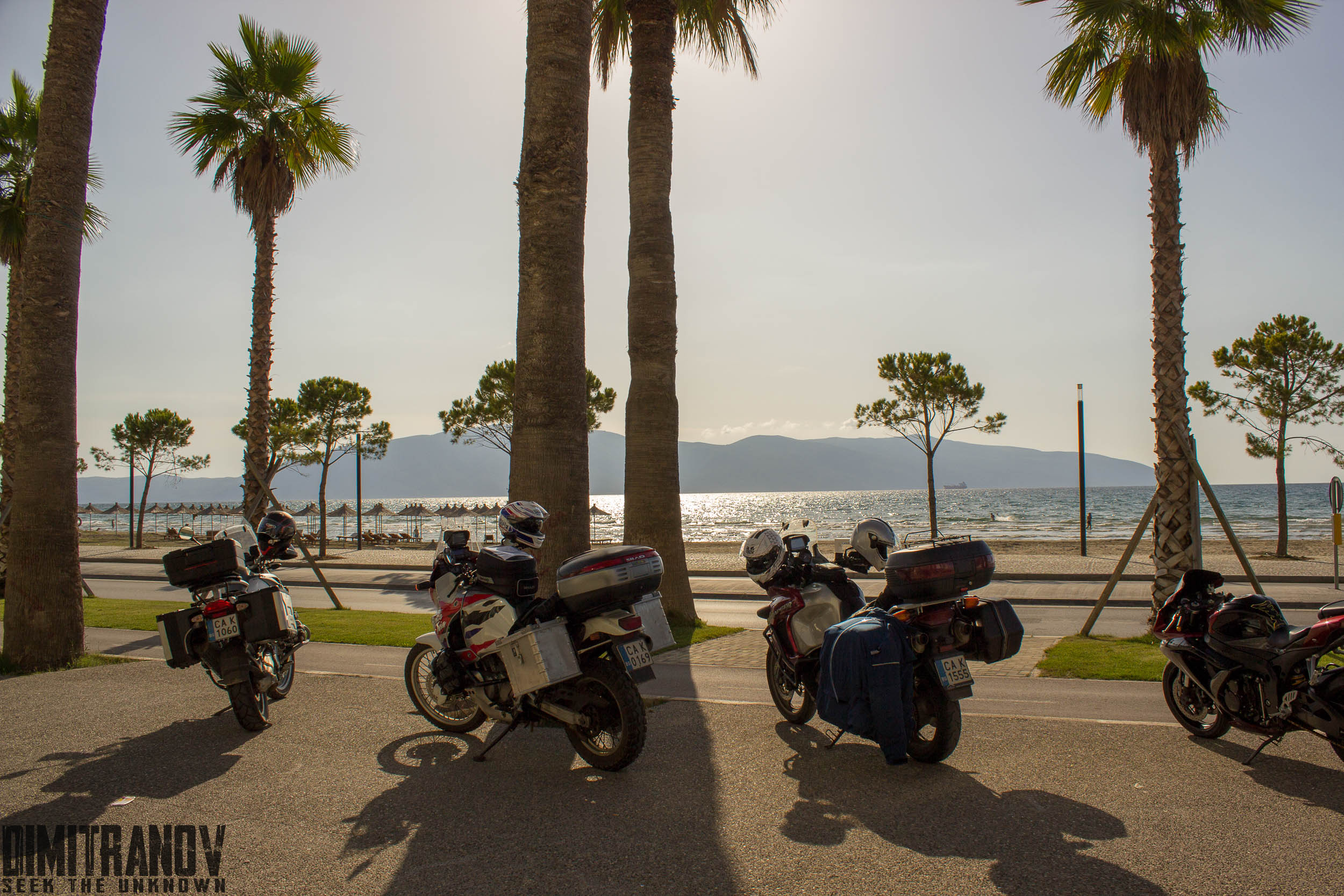 The Republic of Albania or Albanian “Republika e Shqipërisë” (pronounced Shtipërëa), which stands for “Land of the Eagles”. For most Bulgarians, Albania is an unfamiliar country with a bad reputation and our attitude towards it Read more…